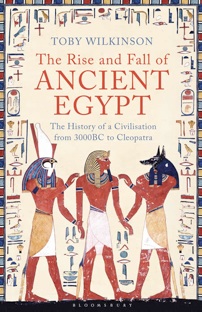 The Rise and Fall of Ancient Egypt — interactive map

The Rise and Fall of Ancient Egypt — reviews

‘Absolutely divine… The Rise and Fall of Ancient Egypt is a thorough, erudite and enthusiastic gallop through an astonishing 3,000 years’.
The Sunday Times

‘I had always presumed, before I read Wilkinson’s book, that it was impossible to write a history of Egypt which combined scholarship, accessibility, and a genuine sense of revelation. I was wrong.’
Tom Holland, The Observer

‘excellent… a sophisticated and complete account of the world’s first nation state.’
The Times, History Books of the Year 2010

‘Wilkinson’s stirring and clear-sighted account of the ancient world’s most enduring civilisation’
Dominic Sandbrook, The Sunday Times, History Books of the Year 2010

‘This is a book full of ‘wonderful things’. As gripping as it is scholarly, as entertaining as it is magisterial, this is a brilliant work of popular history.’
Tom Holland, BBC History Magazine, Books of the Year 2010

‘Not just the pyramids but the politics; not just war and religion but livestock and labour relations: the whole astonishing story meticulously researched and enthrallingly told.’
The Scotsman

‘Egypt has for the past 4,000 years been much vaunted, much debated… Toby Wilkinson’s The Rise and Fall of Ancient Egypt… add[s] impressively to this tradition.’
Bettany Hughes, The Times

‘No detail is spared on this literary journey…
will appeal to anyone… who wishes to learn more about this incredible civilisation.’
Press Association

‘With a literary flair and a sense for a story well told, Wilkinson offers a highly readable, factually up-to-date account’.
Wall Street Journal

‘There has never been an ancient Egypt more fascinating – and yet more recognizably human… magnificent, illuminating and refreshingly readable’
Washington Post

‘Magisterial… a rich portrait of ancient Egypt’s complex evolution over the course of three millenniums… its lessons are not for Egyptian alone’.
Los Angeles Times

‘Take this great book with you on your next boat to Egypt.’
Oxford Times